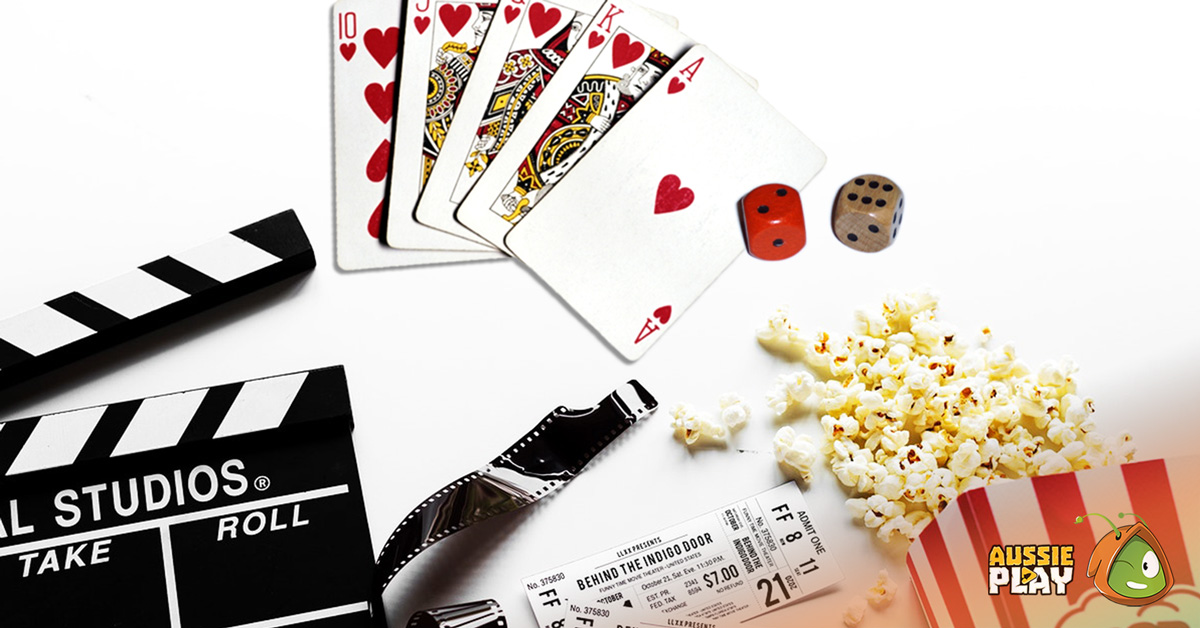 Is there anything more thrilling than the casino itself? Yes, there is: I, Aussie, enjoy these wondrous things you earthlings call movies, especially ones about casino table games. Also, blackjack movies are my favorites. No matter whether it’s a western where rowdy characters are playing the game in a tavern, or a modern movie with a card-counting player. Based on my personal experience with blackjack (yes, I love playing casino games), there is some magic in sitting in the semi-circle table. So if you haven’t watched any movies with a casino theme, I created a list of my top 10 blackjack movies for you.

The spotlight of the movies is a fumey hall filled with people electrified by the energy of the game of chance. Casino tables take on a whole new form on the silver screen — a character’s life story being written while they’re playing a card game. The reason why this type of casino games is often chosen for the screen is the simplicity of the rules. The average viewer does not need to understand the complex strategies to find out whether the player has just won or not.

The thrill of casino games in real life often comes from movie scenes, where the leading actor walks in confidently, gliding across the casino floor. The room seems to be engrossed in one game or another when the character sits at the table. That is when the camera speaks the truth, with a zoom on the player’s face and cards — it tells a story of card counting.

At some point or another, we have all watched movies with the casino as the main topic. The best movie titles introduce the excitement of card games. Among the frequently depicted games are two out of the “Big Four” table games — poker and blackjack, referred to as “21.”

According to many players, blackjack is the only one beatable by simple math. Unlike roulette or craps, where the gambler is playing against the casino, blackjack players compete against the dealer. The dealer has a single deck of cards, and the goal is to beat them by getting a number which doesn’t exceed 21.

And has happened on several occasions, the past is full of real-life characters like Dr. Edward O. Thorp; who even got drugged by the casino personnel, in order to stop him from playing. In the movie world, what attracts the attention of the audience is the familiar faces from the movie screen — actors we all know and love!

Casinos from the movies you can visit today:

Top 10 Casino Movies of All Time

Ever since motion pictures first appeared in color, various directors have introduced casino games to the movies. We all remember sitting on the sofa as a courageous character burns their cigar and plays poker; while their rival sweats, looking at their cards.

Blackjack games as another type of card game are a subject mostly portrayed in the post-’60s movies. The player walks up to the blackjack dealer, as if silently challenging a competitor. The win-or-lose excitement in the scenes is always palpable. Here, we give you the top 10 casino movies in chronological order:

There is nothing more memorable than Paul Newman, in the scene upon his entrance in a train coupe. The game of poker is about to start when he tilts the whiskey bottle, mocking the other players. As they take him for granted, Newman’s character takes the prize.

The movie was written by David S. Ward, who was inspired by a pickpocketing movie “Steelyard Blues,” which was filmed in 1973. Later on, he researched the biggest con-artist of all time. The filming was entirely done in a studio, while the scene where Hooker meets Lonnegan in a diner was recorded in the backlot.

Universal Studios used the same location later in “Back to the Future” in 1985. The plot was so popular that it was named the fourth largest grossing picture in history, earning $156 million at the time.

A world of professional gambling welcomes a newcomer, Stacey. The shy and withdrawn young woman represented by Andra Millian learns to count the cards in blackjack. Her teacher Will is interpreted by Kevin Costner. Stacey wins Nevada casinos by storm, while the plot gets tragic.

A corrupt dealer murders Stacy’s mentor, thus bringing her vengeance upon himself. The newly acclaimed blackjack player recruits a team, coaching them to win every hand and depleting the casino’s bank. The movie, although interesting, is not a masterpiece.

Crude car dealer Charlie Babbitt, played by Tom Cruise, finds out that his estranged father kept his older brother Raymond with autism (Dustin Hoffman) a secret. Charlie finds out that the family fortune of $3 million is left in the institution where Raymond resides.

He decides to take the matter in his hands, retrieving the fortune and taking his brother along. In a blackjack session where Raymond asks the dealer to hit, Charlie discovers that his brother is a card-counting genius: he wins the blackjack hand with a 6, a 4, and a queen. This movie is a legendary legacy of the ’80s.

Timothy Dalton played James Bond only twice; and the second time, it was in License to Kill. As the adamant 007, Dalton sits down at the blackjack table. Casino games are nothing out of the ordinary for the famous agent; but as the stakes get higher, the game becomes more interesting. Although it is not the most popular in the series of Mr. Bond’s accomplishments, the movie is well known for its epic soundtrack.

The movie is a story of greed, power, and murder. The plot gathers various legendary names from the cinematic industry. Robert De Niro plays the mobster Sam “Ace.” Martin Scorsese, the director, depicts the world of high rollers through scams, treachery, and money. Sam’s new position puts him in danger at every corner.

Nicky Santoro, an ill-table-manners mobster, banned from every casino in Vegas, walks in Tangiers Casino and verbally attacks the dealers and the rest of the staff. “Casino” is one of the all-time legendary movies.

A true casino world movie interpreted through the eyes of a dealer. Actor Clive Owen plays the character of Jack Manfred, an aspiring writer who is trying to make ends meet by applying for the croupier position in a high-end casino. The movie depicts life behind the scenes in a casino, stories, and relationships among the people. The plot illustrates the sobering tale of casinos and how they can have the power to make the players lose.

Danny Ocean, played by George Clooney, orchestrates an epic casino heist. In the movie, the hypothesis that casinos keep enough money in the vault is a lie. On the contrary, they try to keep the amount to a bare minimum.

Matt Damon is so skillful in pickpocketing while he steals a wallet from the man in an elevator that the scene has to be played in slow motion.

What would we be doing here if there was no mentioning of 007? The twenty-first movie about James Bond in the series, “Casino Royale” introduces Daniel Craig as a famous MI7 agent sent to win a high-roller game of poker.

The scene of poker where Bond performs “slow roll” is considered to be more exciting than the entire action in the movie. It seems that behind the scenes of the 007 movie, the high-stakes gambling never stops. During the breaks, the cast played poker as a pastime. This actor, who is younger than the actual franchise itself received the British Academy reward for the role.

This movie about a famous group of MIT students, led by their professor, who is played by Kevin Spacey, depicts the high energy of the casino world and a real-life drama. The group is aiming for the jackpot while counting cards and signalizing at the blackjack table. The plot follows up on one of them as that brilliant student becomes a prime blackjack player, and eventually, gets in trouble. In his final disguise, he exclaims, “Winner, winner, chicken dinner!”

Mark Wahlberg stars in this movie, interpreting a classic from 1974. A literature teacher with a gambling addiction sets off to Vegas where he uses his life-long philosophy “You either have everything or nothing at all.” His passion for gambling leads him astray to a path of self-loathing and destruction. The gambling ring he owes money to give him a week to return it.

More Casino Movies That Should Not Be Missed

This comedy, directed by Don Siegel in the early ’80s, depicts a determined would-be Vegas singer. The plot is set in the made-up town of Loserville, while the main character, Bonita Friml, is portrayed by Bette Midler. The singer is in a romantic relationship with a stubborn gambler named Harold (Rip Torn).

The brute Harold intimidates a blackjack dealer, Willie, forcing him to allow the gambler to win every hand of blackjack. The dealer and the singer plan to get rid of the obstinate gambler. Performance-wise, it is not the best movie or the best main actress; but comedy is still there!

“The Last Casino” is an award-winning Canadian movie, which deals with the commonly illustrated topic of a math teacher’s life. Played by Charles Martin Barnes, this character teaches three students to count cards. Since he is banned from every casino in Quebec, he recruits students to play blackjack in his stead.

A loner, Bernie Lootz, played by William H. Macy, owes money to Shangri-La Casino boss. Lootz works in the casino as luck “Cooler” while planning to leave Las Vegas and casinos behind. “The Cooler” grossed over $40 million in local and foreign markets. It was filmed in Reno Hotel Casino.

This popular comedy depicts a Vegas experience in a ridiculous way. Four friends end in the world of Las Vegas; and after a party, which lasts all night, in the morning, one of them is missing.

To raise money for the ransom, the three friends resort to learning the basic blackjack strategy and winning money to retrieve their friend. One of them counts cards, while the others act as distraction. A single hand landed them a soft 17, and thus, they beat the dealer.

The cinema understands the allure of casino lights and sounds. There is a truth when you take a look at the center of the spotlight. Quite rightly, casino games have always found their way to the movie screen. Although many of them did not get to my top 10, they had to be mentioned. Others, on the other hand, are legendary classics like “The Sting,” and portray the world of betting from the perspective of a specific era. The original bet is high and the palms sweaty, as the player turns the card and wagers the last chip. Of course, in real life, we do not comment on banalities. In truth, the lights of the movie screen amplify the drama and excitement of casino games.